cosmic.voyage is a public-access unix system and tilde community based around a collaborative science-fiction universe. Users write stories as the people aboard ships, colonies, and outposts, using the only remaining free, interconnected network that unites the dispersed peoples of the stars.

Humanity has expanded to the stars. Earth is a distant memory.

We journey into the darkness not in a great migration--as many thought--but in small communities, drifting far and traveling at relativistic speeds, dividing from each other by unfathomable distance and time. Our only connections are the thin tethers of the Quantum Entanglement Communicator (QEC). These precarious devices bridge the vast distances with near-instantaneous communication, but provide only enough bandwidth to the ancient relay hub for simple, plain-text messaging.

Here are the annals of Relay Station 001, housed at the Earth-Sun Lagrange point L4 in the SOL system. Found within are the records of transmissions from the oldest and farthest flung ships to have left Earth of old. These are pen-pal letters, reports, updates, cries for help, and calls into the darkness. What is delivered to the system is unfiltered. Some of it is intelligible. For some, common language has drifted too far for clear translation.

Due to time-debt of relativistic travel, dates of individual reports may not coincide linearly between ships. Records are stored chronologically as received at RS001 from each expedition.

Cosmic is a semi-collaborative science-fiction universe where users can sign up to create their own ships, outposts, planets, or other story elements. Using these as the source of their log messages back to the old-Earth relay, they tell their own stories through epistleatory entries. Users are encouraged to explore their corner of the universe in their own way without interference from other members unless first discussed.

New users can sign up by following instructions on the join page. 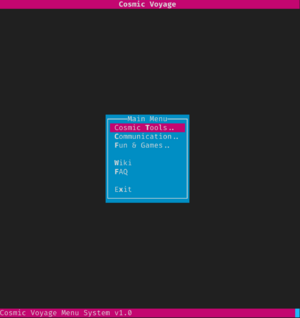 There are a number of tools, services, and games available to users of the system. These can be accessed via the command line, but also via a browsable menu. The menu organizes content into Cosmic Tools, Communication, Fun & Games, Wiki, and FAQ.