dimension.sh is a small tilde created by nikdoof on 26th June 2020, the idea was to replicate a small college community pubnix that existed from 1997 to 2004, named 'dimension.spodnet.uk.com', and open it up to the wider tildeverse and other interested people.

dimension mk1 was originally created in 1997 by 'argh', who was a network engineer at a UK higher education college. The first iteration provided Linux shell services to students of the college, who were looking for a place to communicate and experiment with Linux. At first, the system was only available on the internal network, but once the college gained a connection to the JANET network it was available on the web. Accounts were still restricted to people 'argh' could vet in person, but the number of accounts grew to over 30 members within a few months.

The community made heavy use of 'ytalk', a local SMAUG based MUD, and email mailing lists to communicate. The website also had a very basic forum for discussion, but wasn't as active as other areas.

Due to a change in circumstances, dimension switched to 'h3o.org' for its domain, and with it came a lot of changes to try to appeal to a wider audience. In early 2000 an IRC server was installed on the system, which allowed for larger group communication. The student group created a few rooms and stuck to them as their main form of communication.

Unfortunately due to the students progressing onto university and other users finding their own dedicated hosting the membership slowly declined.

Around mid-2002, the original dimension disappeared offline, we're not sure on the reason but we suspect its due to the administrator, 'argh', leaving his position at the college into another role. The student group created a new IRC channel on EfNet called #dimensionx, and later moved onto their own private IRC infrastructure. 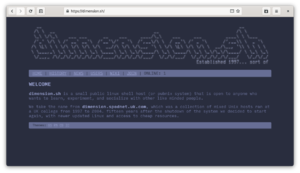 During 2020, nikdoof, a member of the original student group, discovered the tildeverse and had a throwback to his experience with dimension during his college years. Instead of joining one of the existing servers, he decided to create a new home for the 'dimensionites', if they would ever discover it again.

dimension.sh offers the following services to it's members: